Napoli number one shot stopper Pepe Reina has openly confessed his wish to lift the Scudetto title with the club. 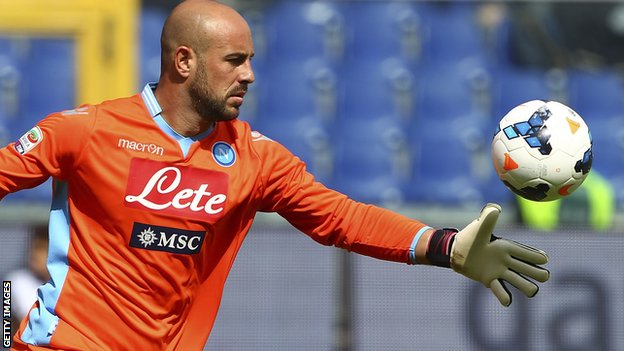 The former Liverpool No 1 told the Serie A club’s website that winning the title would be “the biggest accomplishment” of his life.

“It’s an idea that doesn’t leave my mind. It would be an important point in my career after 17 years at a high level. They always tell us that we can’t imagine what the city would be like. I want to see it! Whoever wins the Scudetto will always remain in the hearts of the Neopolitans and I want to be one of them,” the goalkeeper said.

The outspoken player was recently in a heated controversy that led to a red card for Matias Silvestre when Napoli clashed with Sampdoria. In the heated game, which Napoli eventually won 2-1 despite earlier going down 0-1, Reina caused Silvestre to earn his second yellow card of the game for clipping him when he wanted to take a goal kick.

Sampdoria asked that the league’s management ban Reina for simulation but he was eventually cleared. The club’s lawyer Antonio Romei said: “We put in a wonderful performance that was decided by a refereeing error on a situation that was pretty easy to read, so that’s very irritating.

“The action was clearly visible the fourth official was close by and he could’ve seen that Silvestre didn’t even touch him, but Reina fell down anyway.”